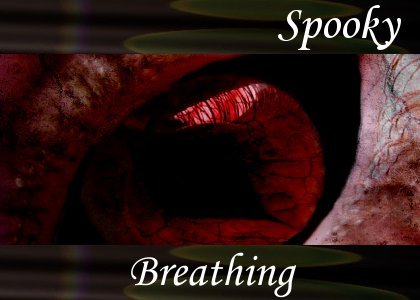 AtmoSpheres are scripted sound emitters that play a long loop of audible background ambiance. The soundtrack length can be several minutes long and is specified in each object name title.

Sound Tip – Place AtmoSpheres in locations where people will be exploring. For example; behind a plant next to a walkway.  Under a bridge to simulate the soft sound of a creek below.  Use multiple Atmospheres to mix and match different soundtracks together for a truly unique and immersive soundscape.

Click or touch the AtmoSphere to bring up the Main Menu. 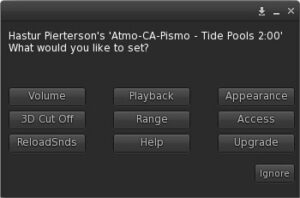 All AtmoSphere features are controlled through the pop-up menu. 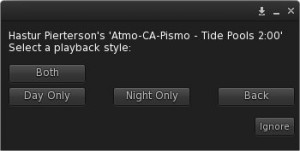 The Playback feature controls how the soundtrack is played and is synchronized with the SL Day and Night cycles.

Sound Tip – AtmoSpheres are synchronized to the region Day/Night cycles.  Changing your SL viewer environment from Midday to Midnight will not change the playback style. 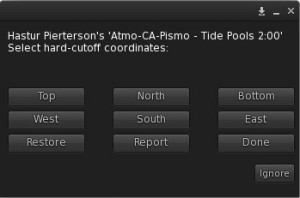 This feature allows the owner to restrict the Atmosphere soundtrack to a defined 3D area.  Avatars standing outside the defined area will not hear the soundtrack.   The sound cut-off can be set from 1 to 20 meters in any of the six directions: North, South, East, West, Top (up), and Bottom (down)  One, multiple, or all cut-off directions can be activated and set to different distances.

Sound Tip – Cut Off directions are based on the SL world compass! 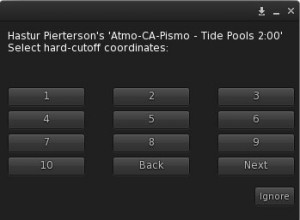 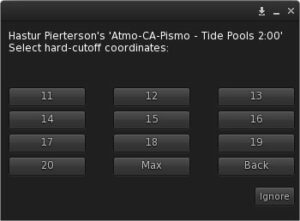 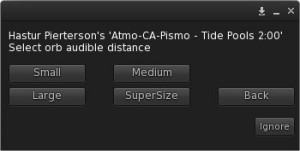 Resizes the AtmoSphere so the audible maximum distance is extended. 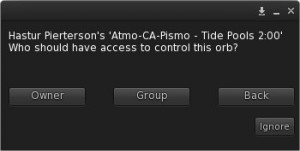 Sound Tip – If group access is selected and no group is associated with the object, access is considered open to all. 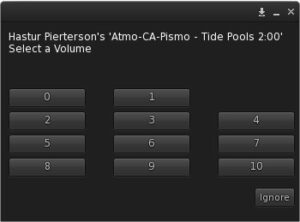 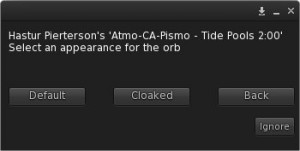 The visual appearance of the AtmoSphere can be quickly changed to hide it from casual view.

Sound Tip – Have you lost an AtmoSphere and cannot find it?  Learn how to use Sound Beacons!

This feature re-loads the AtmoSphere soundtrack files.  Use this option if the script/sounds are moved from the Atmosphere to your own object.

When a new software update is released, use this option to update your AtmoSphere.  Detailed instructions are provided when upgrades are made available.